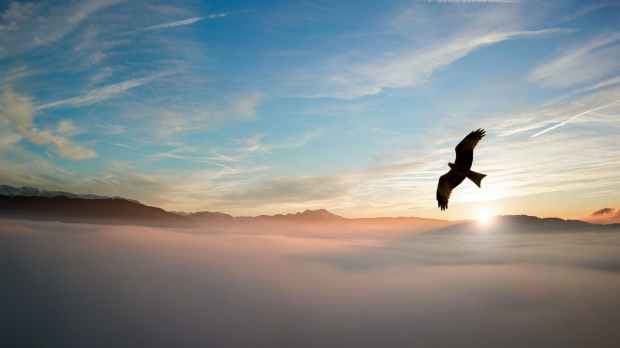 scanning the island below,

this is her Kingdom”

The White- tailed eagle is the largest bird of prey in the United Kingdom and has a wingspan of 2.5 metres. The birds are almost 1 metre in height. The head and tail are pale in colour which, gives them their name. They are larger than the Golden eagle. They scavenge on carrion but, they also hunt seabirds, rabbits, fish and unfortunately, have been known to catch lambs.

The video was filmed yesterday in the Sound of Raasay of a large female known locally as “Fifey”. She was reintroduced to the East coast between 2007 and 2009. She flew to Skye shortly after this time and made the Sound of Raasay her territory. She can be ferocious when protecting her food from Gulls and Hooded crows.

In the film you can see her wing tags fitted before her release. She has bred successfully for a number of years and reared two healthy chicks this season.

White-tailed eagle hunting in the Sound of Raasay, Skye

The eagle took her catch to a small island in the sound. The crew could see her holding the fish in place with her deadly talons while, she tore it apart with her huge beak.

The image below is of a juvenile White-tailed eagle catching a fish, thrown by a crew member of the Stardust Sea Eagle boat, Portree.

"Love Skye-Love Nature-Love Life" Skyenatureblog.com provides an artistic journey through the seasons, describing the natural beauty of the island through, prose, poetry, art, photographs and videos. I hope to give readers a taste of the Skye experience. I hope you enjoy the journey The Isle of Skye has dramatic mountains, wild glens and amazing seascapes; it offers a varied wilderness for free spirits. There is an abundance of hidden places full of native trees, wildflowers and wildlife to enjoy, in peace and tranquility. This sensational Island changes constantly through the seasons, with wild Atlantic storms, snowy mountains and balmy Summer nights with spectacular skies. The Summer wildflowers provide a colourful feast for insects, which feed the many species of songbirds, both native and Summer visitors.

View all posts by skyenatureblog →